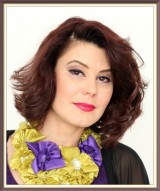 For me poetry is a process of self-discovery, the plateau where strong emotions are intensely expressed, explored and explicated, it is a process of cognitive and emotional insights. My writings are my own spiritual autobiography, the stages of my own development, as a Thinker and Feeler. Projecting it outside I hope to awaken in others deeper realities of life within themselves. I am a true believer in the power of the words and the mystery of unlocking latent realities, universes, thought, emotions. It is supposed to elevate and enrich their lives as well!

Society is a key factor! A society which believes and fully supports art plays a major role in the development of an individual.

Why literature or poetry in specific interests you so much? Do you think literature or poetry is really essential in our life? If so why?
Poetry is the language which can say more and more intensively than any other language implied in other literary pursuits. It is like a multi-dimensional, involving the readers’ sense, emotions and intelligence. There were poems which literally changed my perspective upon life, and some of them have like hidden secrets which need to be unlocked. For me poetry is important as it has that fire in the person’s life, changing it alchemically, bring new realms to it, through its powers and rhythms indeed breaking the conscious mind helping it to awaken and nourish it as well, as if it honors both the known and the unknown in us and the world itself. Personally for me, poetry is an act of existential leap, illuminating our life even bringing new breath into it. When I write I like to galvanize the readers’ attention, shaking and awakening them. With my poetry it is as if I become more human, more fully engaged with the world.
Do you think in this age of information and technology the dimensions of literature has largely been extended beyond our preconceived ideas about literature in general?
The digital medium has provided the basis for multi-mediality and every day we learn how we can manipulate in new ways the information. The transformation done by the web is multi-dimensional, it changes the objects of study and in the same time the subject who studies it. The changes in time will become greater, as technology is very fast evolving, and of course with it all other fields. Accessibility and convenience are top priority benefits.
Do you believe all writers are by and large the product of their nationality? And what are the factors which pay dividends and which become obstacles for your ultimate growth as an international writer even beyond your time?

We are all the “products” of our own nationalities, no doubt about it. It is in our DNA, carrying our own ancestors’ heritage. Each of the nationality carries its own history which of course impacts on each individual, shaping him/her. Even if I write in a language which is not my mother tongue, I do carry my own language characteristics, a very specific poetic lyricism particular in my part of the world. That makes the approach being different, even enticing for many.

I do not believe there is any obstacle for growth as international writer, if so far you have a strong message out there, you will always find an audience which resonates with your own style, approach, view about things.

In this patriarchal society do you think, as a woman you need more free breathing space to uphold your own personality and liberty? Would you like to be addressed as a feminist?

I consider my writings as a tool for women to claim their own feminine powers. My writings try to overpass what seems to be the humans’ limitations but emphasizing the essence of a woman, of the Goddess. The main theme, Love, is basically presented as a transformative experience in life, the energizing force of the Universe and empowering the creative feminine.

As a writer I may not come across as feminist as more as a sensually mystic writer. Even though I am a strong believer of gender equality, with the same civil rights and liberties, this is not the approach I have when I write, pleading for human equality but rather a more wakeup call addressed to women to reclaim their feminine powers for themselves, to become stronger, loveable, therefore a better woman in society. It is a call not to prove to others who they are but for themselves.

Humanity has suffered immensely in past, is still suffering around the world. What role can literature in general play to bring a better day for every human being?

I see the act of writing as an existential leap, delivering people from the habitually or conventionally established world into new horizons of the spirit, and that brings a breakthrough in one’s overall consciousness.

All spiritual traditions teach us about the Power of the Word, and how life changer can be, affecting us and others, ability to change minds and lives forever. As words, thus poetry, have creating force of healing, awakening us from a deep quotidian sleep!

For me, a good poetry is like a magical spell, which carries power, color, vibration, intend, magnetically charged. Us, the poets, are the alchemists, transforming the emotions, mostly through katharsis, into poetic “spellbinding”. Saying that, we ARE responsible for the words, the ars poetica we deliver to the World and we should consciously choose to cultivate the literature’s curative powers! Using the Art of Words it is as if we practice Magic, and with this, altering the World and shifting its state of consciousness. I am a believer that us, the writers, can bring change and challenge through poetic consciousness!

Many thanks ANCA for spending such a wonderful time with us, we would like to conclude this interview with a personal note, are you satisfied about your own achievements in your life? What are your plans for future?

Thank you! My “achievements” are my own personal developments. Over the years I have added so many different flavours to my own persona, growing, expanding and hopefully becoming a better person. In sense of writing I have only one dream: that my writings indeed will bring power to heal and awaken others. Making a better world! This is my greatest mission!

For the readers/listeners who wish to read/listen watch my audio/video poetry, they can find me on these accounts:

Smashwords Interviews are created by the profiled author, publisher or reader.