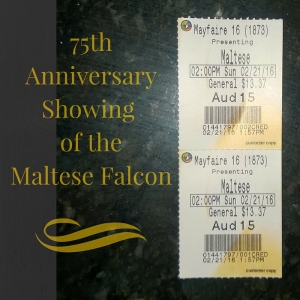 Humphrey Bogart, Peter Lorre and Sydney Greenstreet – I just love those guys!  So when I realized that The Maltese Falcon was being shown on the big screen, I knew I had to go. Because seriously – How do you pass up the chance to see some of the most memorable movie characters brought to life – Sam Spade (Bogart), Joel Cairo (Lorre) & Kasper Gutman (Greenstreet).  I was in black and white movie geek heaven!

What I think  is so compelling about the Maltese Falcon is this movie is character driven. The plot it there – but it’s the characters and in particular – the incredible chemistry between these three actors that capture my attention.

Seeing the movie on the big screen offered a unique perspective.  I noticed moments of humor that I had missed in the past and found a new appreciation for the cinematography.

And then there’s Sydney Greenstreet.  The Maltese Falcon is Greenstreet’s first time on film and he’s a natural.  The way he moves says as much as any words he might use.  He’s my favorite actor to watch when doing character studies.

Quote from one of my favorite scenes between Kasper Gutman (Greenstreet) and Sam Spade (Bogart).

I distrust a man who says “when.” If he’s got to be careful not to drink too much, it’s because he’s not to be trusted when he does.
~ Kasper Gutman, The Maltese Falcon (1941).

Now, if I can find a showing of Conflict (Bogart and Greenstreet, 1945)…

One thought on “The Maltese Falcon 75th Anniversary”