I recently downloaded a couple of YA novels.  Because they were located next to each other on my Kindle, they caught my attention. Is is just me or is there a resemblance?  While there are several differences, to my eye, the model appears to be the same.  Which got me thinking…  What’s the chance of other books having similar covers?

Seeing as how I didn’t know – I did a search and was surprised by what I found.  One of my favorite trilogies is the Home Series by Megan Nugen Isbell.  I liked her covers.  They were simple yet sweet and I thought they captured the mood of the stories.  It was the cover of Last Train Home that initially hooked my attention. 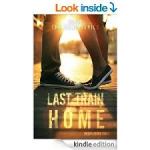 But as I looked at the cover of Love and Other Unknown Variables, I realized that certain images must resonate with us.  What else can explain the fact that out of the thousands of stock images available cover designers are choosing some of the same ones.

With my first novel, Of Dreams and Shadow, I hired a graphic artist to design a custom cover.  Dreams is a young  adult paranormal novel.  I thought the artist did a wonderful job capturing the feel of the book with all the shadowy  swirling action.  That being said, I don’t think the cover says Young Adult and I can’t help but wonder whether a different cover would draw more readers.

My second story, The Reasons Why, is a new adult novella.  I decided I wanted to use a different cover designer.  I  wanted a cover that said new adult/contemporary romance.  After searching the internet, I found exactly what I  was looking for – a cover that hinted at the longing my characters  felt.  Perfect!!

But apparently, I’m not the only author who was drawn to the image:

Was I surprised?  Absolutely.  Was I upset with my designer?  Absolutely not.   Like me, and obviously the other designers, she connected with the image.  She purchased that image and designed a cover that I ultimately bought.  And even though there are other book covers out there that share the same image as mine, I can’t imagine any other image capturing my story the way those two hands do.

Below you will find the links to two different websites.  Indie Book Launcher takes a decidedly custom cover position while Creativindie sides with the stock image folks.  As a writer, you will have to decide which option suits your needs.